You know what has got to be hard? Starting off as a young, new, black metal outfit in 2014, wanting to stay true to your roots, and yet trying to create a sound that is original and that doesn’t just sound like early Darkthrone. When I heard the first few riffs on Askrinn’s debut album “Hjørleifsljóð”, I had that constricting feeling; the one where you know that this is going to be awesome, but it’s going to be the same old thing? Well, I am happy to say that Askrinn ended up proving me wrong, and quite early on into the album, too.

“Hjørleifsljóð” starts out as standard, old-school melodic black metal as you can get right out of
the gates with the opening track, “Bjarmalandsfør Hjørleifs konungs,” but partway through, something very strange happens. At 2:03, the beat drops out, and suddenly Askrinn is playing in a really weird meter uncommon to black metal. The tri-tone is there; in fact, at the slower pace it is even more pronounced, but I did not expect them to do something as interesting as shifting meter. While tempo changes are not unique to the genre, shifts in meter are generally pretty uncommon. I love it, however, as it gives the music a different depth and creates an unnerving feeling unique to the kind of music which you can’t really grasp hold of temporally. 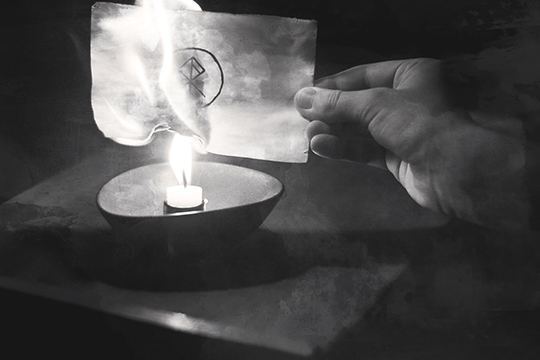 Another really cool aspect of Askrinn’s music is the melodic guitar. As with most black metal, singular guitar lines are largely muted, but when they do pop out of the mix, the tone of the guitar is strident, and sounds almost like bagpipes. Askrinn utilizes all sorts of interesting guitar techniques on “Hjørleifsljóð”, like on the intro to “Hjørleifr mægðist við Hreiðar konung,” which features quiet, distortion-less guitars. At 2:45 in this track, the bagpipe-like guitar line is particularly noticeable.

These odd tempo shifts and strident guitar lines appear throughout the album as well, always keeping things interesting for the listener. The mix also contributes to helping these innovative elements of the music come to the forefront. While not overly hi-fi in production, the mixing of the parts is very well done and emphasizes the guitar when it needs to be brought out, etc.

“Hjørleifsljóð” cover features what looks like a fjord in Norway. It reminds me a lot of Windir’s old album covers, with the lone Viking standing looking out over the vast sea, only Askrinn’s cover lacks any people. The lack of human involvement in the album art makes the starkness of the image even more apparent. Billowing white clouds blend with colorless ocean, making the black of the landmasses much more prominent. As far as black metal covers go, it’s a good one; desolation and the natural world simultaneously.

Over the last few weeks, I have found that “Hjørleifsljóð” has grown on me quite a lot. Just as always, it would appear I can’t go wrong when it comes to French black metal. I always am pleased to hear bands taking new directions in black metal, and I was pleasantly surprised by the interesting effects used on the guitars on the album, as well as the meter shifts. Askrinn reminds me musically very much of bands like Taake and Mgła- melodic and retaining elements of their roots while remaining innovative. Very much true to everything I have seen of the third wave of black metal so far, it would seem that the legacy is in good hands.