Last year’s “Sky Burial” LP was a massive breakthrough for Richmond, Virginia’s Inter Arma, capturing the attention of many, including the influential Pitchfork. Roughly a year and a half later, here stands “The Cavern”, their second release through Relapse Records.

Just one track makes up this EP, yet it lasts almost as long as your average album. Orion Landau, Relapse’s in-house graphic designer, has made a monochrome vista of a front cover. The cavern from the title looks like a sinkhole slowly dragging down the settlements and environment, from around it.

The walls are positioned around the listener at first, before some definitively post-metal riffage leads us in, interspersed with crescendoing fills led by T.J. Childers, behind the kit. An evolution into sludgy doom, juxtaposed with dark prog then barrels through, and it’s in this section that Mike Paparo shows his vocal versatility. At one point, Paparo has the stabbing bleakness of Amenra’s Colin H. Van Eeckhout. At another, he can sound like Troy Sanders on Mastodon’s earlier work. 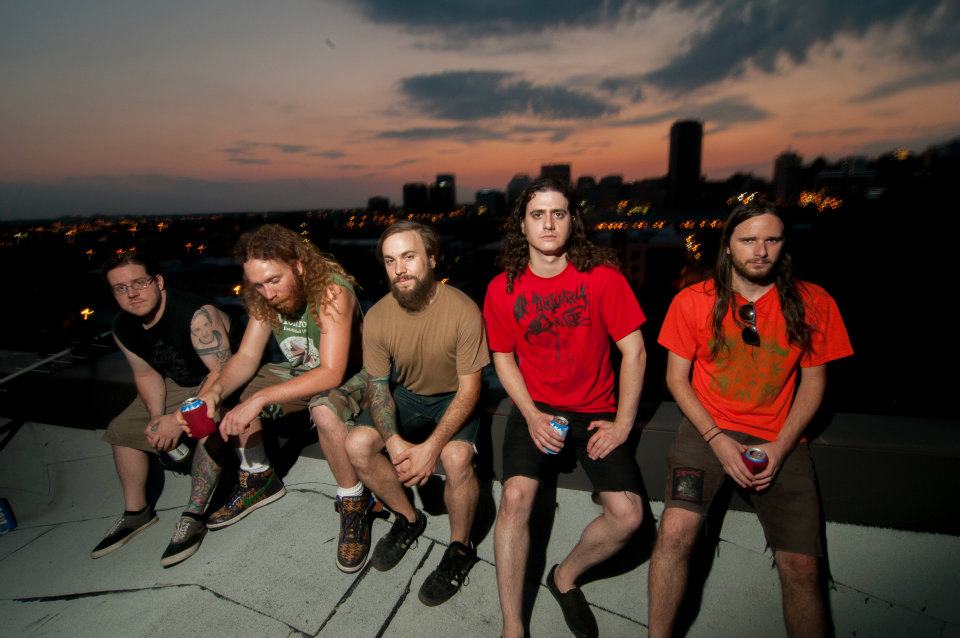 Although it feels like disc two to “Sky Burial”, this piece was in fact composed between 2008 and 2010. This is further evidenced by listening to the acoustic “Prognosticate” instrumental, off their debut LP, “Sundown”. That composition was revitalised with Dorthia Cottrell (of Windhand)’s folky vocal overtones, and can be heard from around the 27th minute of “The Cavern”. Speaking of guest appearances, there’s more than one.

Meg Mulhearn (Divine Circles, U.S. Christmas) lent her violin skills. Jon Liedtke (Shroud of Despondency) played a theremin on the recording, and Mikey Allred (Across Tundras) had bowed bass & organ duties. Shibby Poole (Yautja), Liedtke & Allred all laid down synth tracks as well.  Steven Russell & Trey Dalton (of sister project, Bastard Sapling) on guitars, are complimented by Joe Kerkes on bass, and all stamp their presence on the track from the 30th minute.

It’s a free-roaming yet introspective instrumental section that lets you appreciate the scale of this project, the image portrayed and the band’s ability generally to put out textured music that doesn’t get boring. From the 40th minute, the tempo really slows down, and it feels as though the entire space is echoing back, and fully surrounding you.

The pressure builds and builds, until all that remains is white noise. “The Cavern” lives up to its hype, and given the singular track, 40+ minute runtime, really doesn’t fall into the trap of being gimmicky. All the parts are truly connected, as opposed to just sloppily & lazily glued together. Certainly this is one of the best EPs of 2014, but it’s sufficiently epic that it should be rubbing shoulders with LPs in those end-of-year best-of-metal-in-2014 lists as well. With this release, Inter Arma have taken themselves to the next level, and now we should all be excited to hear what follows.