By 1986 I was well and truly into the thrash scene, probably a good couple of years into it, so where better to start looking back at the many thrash gigs i’ve attended than with the Titans Of Thrash themselves, Metallica.

I’ll admit it, I only got into Metallica after the release of “Ride The Lightning”, yes I could try and be cool and ever so matter of factly and claim i’d been on board since their debut “Kill ‘Em All” but I wasn’t so no point lying about it. I only got that release after “…Lightning”. I remember buying “Ride The Lightning” at WHSmith for £4.49 on vinyl and doing so because I liked the sleeve and they looked cool on the back cover. Have to also admit I had no idea what they sounded like when I bought it, but was looking forward to taking it home and slapping it on the old death deck. What came out of the speakers that night not only blew me away but also opened yet another avenue of rock music for me to explore. I’d never heard anything like it. That acoustic intro then “bang” straight into the ferocious open riffs of “Fight Fire With Fire”, the rest as they say, is history.

Anyway, the gig. I went to this one with a good friend, we’d both become huge thrash fans and were both super excited about seeing Metallica, especially as Master Of Puppets, which had come out that same year, had totally blown us away. Back in those days we had to send a Postal Order to the venues for tickets, so it was a lottery as to which seats you got? Ours on the night weren’t too bad at all, downstairs in the Stalls about half way back.

We caught the train to Manchester and got there mid- afternoon which allowed us quite a bit of time to visit the Mecca that was “Powercuts” record shop. You could go there with a fiver and leave with maybe five or six LP’s, most went for around 99p a pop because they were imported cutouts. But on that day I resisted the temptation of buying any as I wanted some Metallica merchandise but many a crisp note or two was spent there in the years of gigging that followed. 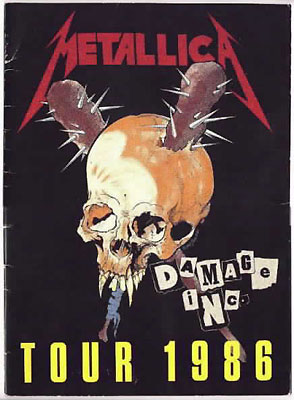 We got to the Apollo later that evening and the surrounding area had been taken over by the Thrash Brigade. Everywhere you looked it was denim, leather and white baseball boots. Another fashion accessory of the scene was the skin tight jeans patched up with beer towels…what the hell was all that about?

We got in and made our way to the merch stall, by now i’d become wise to the shirtleggers and would only buy official merchandise. Bought myself a couple of shirts, the …Puppets tour shirt and the Metal Up Yer Ass shirt. That was a bit of a turkey to say the least. The toilet bowl with the blade sticking out of it on the front and an electrocuted skeleton on the back…not my best ever purchase at a gig but believe me, far worse shirts were to come!!

Plonking ourselves nicely in our seats we waited for the support act to take to the stage. The support for this tour was none other than NYC’s finest, Anthrax, so it was going to be a good ol’ thrash-fest. Out they came at around 7.40PM and the place went mental. 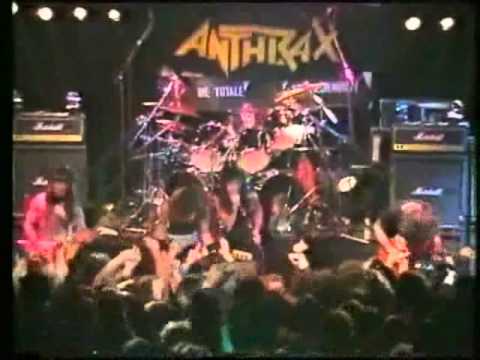 Everybody were up on their feet, some on their chairs, moshing away like maniacs in the small leg space between their seat and the one in front. Naturally we joined in. Madhouse, A.I.R., Medusa, Metal Thrashing Mad, it was one classic after another. Probably one of the liveliest bands i’ve seen on stage, Scott “Not” Ian, yes it was the period when he shaved NOT into his chest hair (???), especially. By 8.25 they were done and gone.

“How could Metallica beat that” we asked each other? Well, if i’m truthfully honest, i’m not sure they did?

9PM and the room went dark and the opening notes of Ennio Morricone’s “The Ecstasy Of Gold” was pumped out of the PA to raptuous screams and applause which then led to the acoustic intro of “Battery”. Then it was time to hit the lights, reveal the album cover backdrop and “BANG!!!” there they were tearing into the frantic opening chords of said song. “But hold on, Metallica are a four piece” I said to myself, “so why are there five people on stage?”. Unbeknown to us, James Hetfield had broken his wrist a few days prior to the tour and couldn’t play guitar, so they’d roped in guitar tech, John Marshall, to play rhythm and a damn fine job he did too. Now the only downside to this was Hetfield persisted in running all around the stage for the entire gig and he soon got out of breath and because of this his vocals were somewhat shabby that night.

I think this was the only time and tour that Metallica weren’t a four piece on stage, so I guess a little piece of history was experienced? We then got the title track to the latest album and Marshall’s take on Hetfield’s solo in the middle of the song was spot on. It was ‘Tallica classic after classic then on in.

Then we got the piece de resistance…Cliff Burton’s bass solo “Anasthesia (Pulling Teeth). Burton was the epitome of cool in the band in his denim jacket and bell bottoms, who would have imagined his fatal demise only ten days later in that tragic bus accident in Scandinavia?

They concluded the main set with “Seek & Destroyaaah” complete with “Scanning the scene in Manchester tonight” lyric change, “Creeping Death” and then exited the stage. But we all knew more was to come and out the came and tore into “The Four Horsemen”, a horrible Kirk Hammet guitar solo, Diamond Head’s “Am I Evil”, “Damage Inc.” And finally for their second encore “Fight Fire With Fire” and then it was indeed all over.

The first in a long line of Metallica gigs for yours truly. Having seen them on every proper tour since. A truly memorable affair possibly due to the five piece lineup or because it only cost £4.50 but most definitely due to the fact that I got to see the bassmaster, Cliff Burton live on stage. Rest In Piece brother.